Г—
FASTER ORDER PROCESSING! We are now processing all in stock items within 1 day.В * Click for Details

There will always be a need to install constraining (safety) devices to threaded fasteners in applications where vibration, kinetic energy, or the need for high reliability is present. Their purpose is to restrict (to a minimum) the unintentional rotation of the fastener.

The process of installing Safety Wire remains awkward and costly, and the inspection process is demanding. The removal and rework of installed Safety Wire is a common occurrence.В Safe-T-CableВ was invented to address these problems in modern Airframe and Engine Systems. The Safe-T-CableВ Kits are consistent in their construction/ application, and the user-friendly tooling guarantees a secure and reliable installation each time it is used. Operator training is simple, Inspection is objective, and rework is virtually eliminated.

Safe-T-CableВ is constructed of high tensile strength, stranded cable. It is more flexible than its Safety Wire counterpart, although the working diameters are equivalent. This provides a stronger assembly which has greater strength and lighter weight. The cable ends are electrically fused to form an easy threading end. The cable is pre-cut to various lengths, and is supplied with a square formed end cap attached to one end. 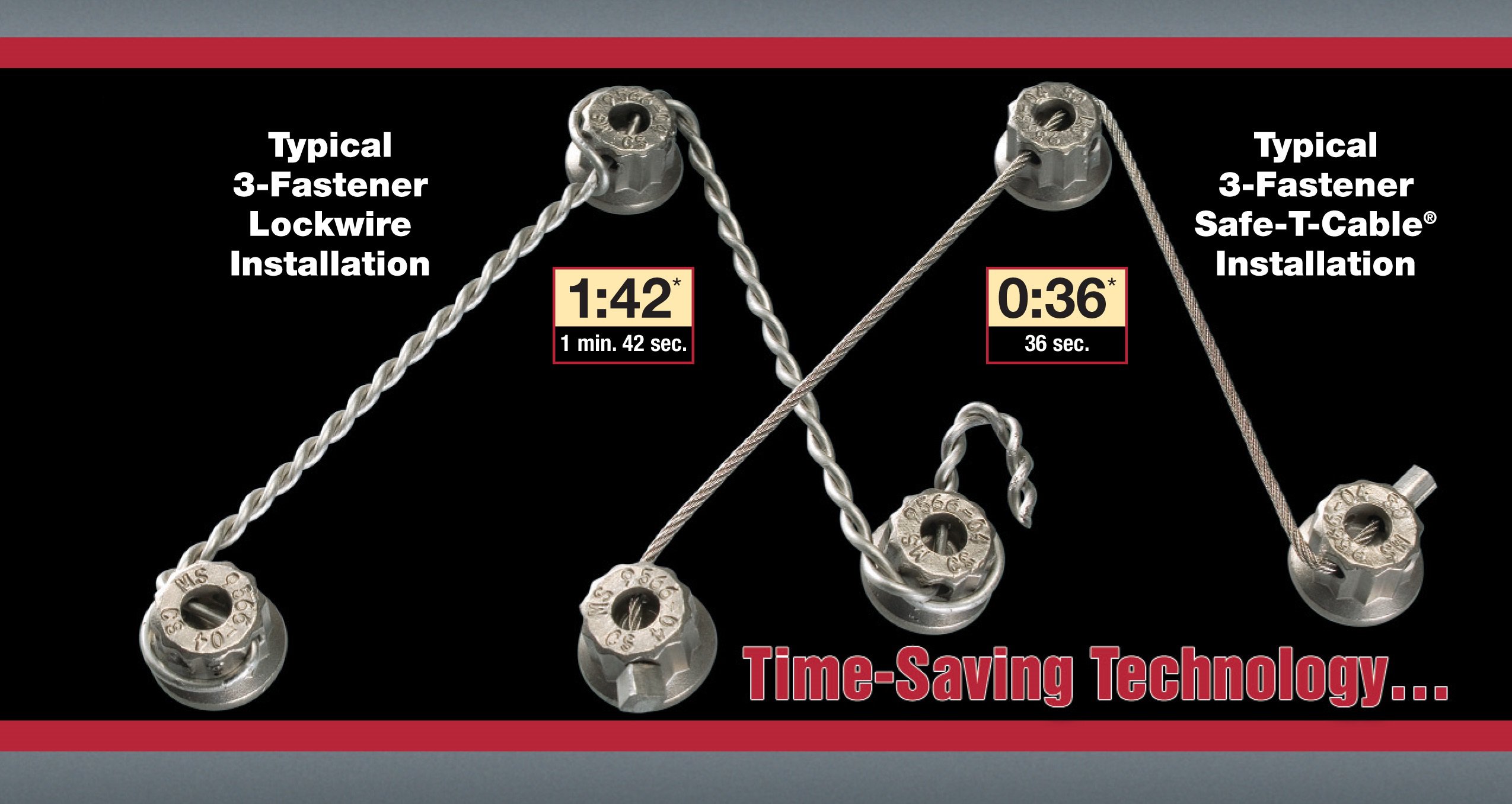 Correct tension is applied with the tool

The ferrule is crimped and the cable is cut flush with the end of the ferrule. Discard excess cable and the job is complete!В

This document is called out in many contracts, drawings, and process manuals. Safe-T-Cableв„ўВ was included in NASM 33540 in revision 1, 6 Jan, 2003. It is published and controlled byВ AIA (Aerospace Industries Association) and can be purchased on-line at the following web address:В http://global.ihs.com/?RID=AIA

Many Tech Manuals and Tech Orders that are used by the U.S. Military and FMS Organizations to support Aircraft, Aerospace, and Defense Systems have been revised to include Safe-T-Cableв„ў. The technical information that is required to select, install, and maintain the Safe-T-Cableв„ўВ and Application/Verification Tooling is included.

The General Tech Manuals/Tech Orders are the following:

The FAA Approved Manual (supplied by the OEM) on the specific aircraft (or subsystem) will advise the operator/maintainer if Safe-T-Cableв„ўВ is approved by the OEM on that aircraft/application. If it cannot be determined from this, or other documentation, the operator/maintainer should contact the OEM assigned representative, and request information concerning the use of Safe-T-Cableв„ўВ on that aircraft or subsystem.

NASA Tech Briefs magazine has also recognized Safe-T-CableВ as a modern Space Program Technology on one or more occasions. Safe-T-CableВ has been used on the Space Shuttle main orbiter engines, structure, and payload applications.